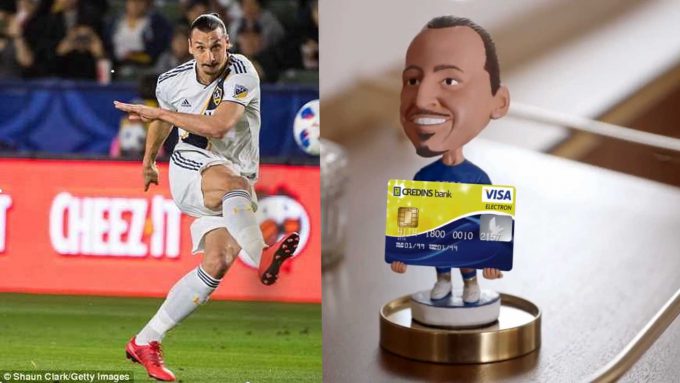 Zlatan Ibrahimović is the face of VISA card in the world cup campaign Rusia 2018. Credins Bank unites its clients using VISA card with the inspiring atmosphere of the world cup. VISA, at the end of 2017, had over 736 MILLION cards in circulation around the world and in Albania; at the end of April 2018, there were 759,131 worldwide Campaigns of the payment giant VISA, which saw Zlatan Ibrahimović as a protagonist coming to Albania thanks to the cooperation between Credins Bank, BBDO and Visa Card International. Ibrahimović has won 33 important trophies in his career and has played for more than 20 year in the green field. “We are always following the impressive career of Zlatan Ibrahimović in the playing field, appreciated his charming and colourful personality - says Lynne - Biggar, Head of Marketing and Communication at VISA, - and are very excited that Zlatan will be our partner for FIFA WORLD CUP campaign™ “I am very proud to be working with VISA, the world leader in payments,” Zlatan said before the campaign. “I always try to be the best in football, so a partnership with Visa represents what I continue to strive to be—the best.” This inspiring international campaign attracted the attention of Credins Bank, which applied to bring it to Albania. Credins Bank is VISA partner since 2007.

This campaign not only aims at bringing Credins Bank clients, holding a Visa card, or merchants that accept payments in POS Credins Bank, closer to the magic atmosphere of this World Cup, but to show how, thanks to such a simple method of payment, as the card represents, the Albanian citizens have become part of an international reality. This campaign addresses young people and invites them to use cards in their daily lives. Credins Bank was part of the forum organized by the Albanian Association of Banks and Bank of Albania on "Financial education for financial inclusion" on June 29, 2018, and the campaign with Zlatan Ibrahimović is one of the concrete examples of how Credins contributes to the financial inclusion and provides inspiring examples to make Albanian youth feel part of a global reality.