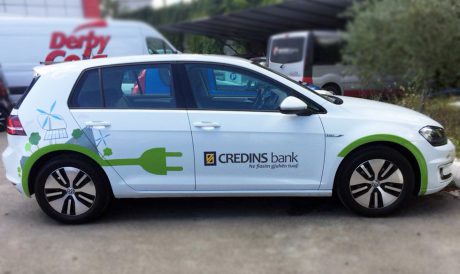 We have often heard and read about electric cars circulating around the world. It was a pleasure this morning when having the coffee as usually at Blloku area, Golf Mark 7, 100% electric, branded with the Credins Bank logo, appeared in front of me. Part of the social responsibility policies and pursuant to environmental care and contributing to the community in which it operates, Credins Bank began to use electric cars in the capital city, taking it one step closer to innovation and digitalization thanks to the intelligent systems they operate by, but above all, reducing the negative impact on the environment. It is interesting to find out that electric cars have been around for 200 years, yet today they are the subject of the future. According to The Guardian, there are more than one million electric cars in Europe today, as sales increased by more than 40% in the first half of the year. Europe hit its all-time highs, nearly a year after China, which has a much larger cars market. Between January and June, about 195,000 plug-in machines were sold across the EU, Iceland, Liechtenstein, Norway and Switzerland; a 42% increase compared to the previous year. How does the electric car charging works? The charging process is simple and is carried out in 3 different methods. With a simple home outlet (where the car is charged all night) with a powered charger, whereby the car is charged for 8 hours, or the fast charger, whereby the car is charged in about 37 minutes. The autonomy of electric cars has improved significantly (remind you of the new Volkswagen Golf) which offers 300 kilometres before using the charging plug. A study in the EU area shows that electric cars emit, on average, during their lifecycle, 55% less CO2, and this indicator is thought to be improving.